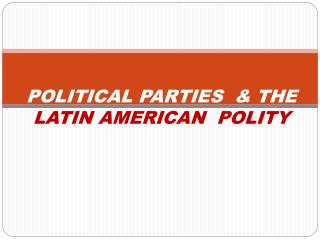 POLITICAL PARTIES & THE LATIN AMERICAN POLITY. INTEREST AGGREGATION or the Combining of Demands. An activity process Backed by resources Can be performed by Individual or group Political party the dominant form. INSTITUTIONAL GROUPS INTEREST AGGREGATION. Meeting the Challenges of Secondary Education in East Asian and Latin American Countries - . presentation for kuala

Unit 4: Latin American Revolutions, Nationalism, and the Unification of Italy and Germany - . from 1500 to 1800, latin

“Development of a Harmonized Dossier for use Across Latin America” - . maritza moncayo manager, regulatory affairs,

REGIONAL ORGANIZATIONS: THEIR EVOLUTION IN LATIN AMERICAN AND THE CARIBBEAN - . david a. novelo. objectives. to