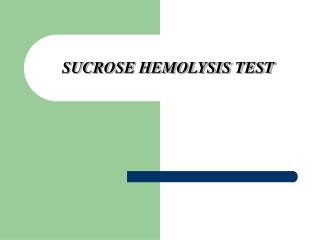 SUCROSE HEMOLYSIS TEST. The sucrose hemolysis test is used as a confirmatory test for paroxysmal nocturnal hemoglobinuria (PNH) when the sugar water test is positive. can sucrose be autoclaved

Hemolysis: premature destruction of the red cells - Rbc normally survive 90 to 120 days in the circulation. kind of

Baby Formula: get rid of the sucrose. - Speaking of sugar, did you know that baby formula milk (even the healthy