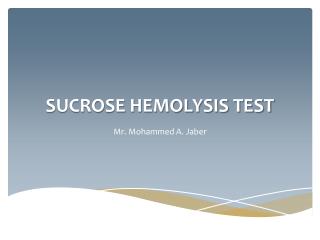 SUCROSE HEMOLYSIS TEST. Mr. Mohammed A. Jaber. Introduction . The sucrose hemolysis test is used as a confirmatory test for paroxysmal nocturnal hemoglobinuria (PNH) when the sugar water test is positive .

American Government - . pre-test. government pre-test. what is the supreme law of the land?. students will identify what

Hemolysis: premature destruction of the red cells - Rbc normally survive 90 to 120 days in the circulation. kind of

Complement Fixation Test - . lab 10. introduction. the complement fixation test is an immunological medical test that can

What is The Full Monty test and how to do it? - We offer a range of screens which combine individual home sti tests