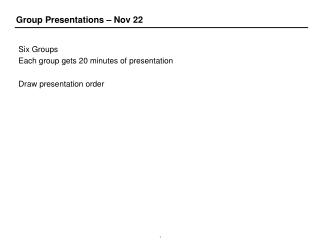 Ch. 7 - . groups, organizations, and institutions. groups. a key element of our social structure and much of our social

Muscles… Group Presentations - . your group will focus on a specific region of the body! …and this will get you

Chapter 10 - . participating in groups. groups. participants are those members of a group who interact to bring about the

Chemistry of the Environment - . turn in your pre-lab turn in your soda ash report did you place group form into the d2l

Animal Projects - . presentations on monday may 19th. animal projects. groups of 3 each group will be given