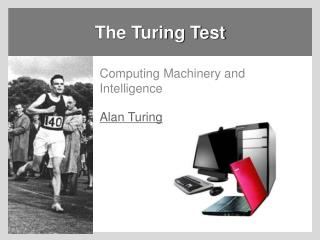 The Turing Test. Computing Machinery and Intelligence Alan Turing. Some Theories of Mind. Dualism Substance Dualism: mind and body are differerent substances . Mind is unextended and not subject to physical laws. Interactionism: mind and body interact

The Church-Turing Thesis - . chapter 18. are we done?. fsm  pda  turing machine is this the end of the line? there

Turing Machines - . the next level of computation. turing machines from alan turing, 1936 turns out to be the last the