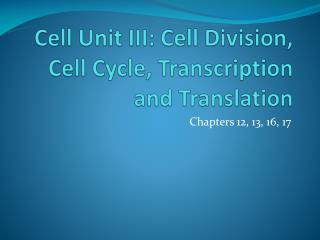 Cell Unit III: Cell Division, Cell Cycle, Transcription and Translation. Chapters 12, 13, 16, 17. Limits to Cell Growth. The larger a cell becomes, the more demands a cell places on its DNA If extra copies of DNA are not made, an “information crisis” would occur The Cell Cycle - . an ordered set of events, culminating in cell growth and division into two daughter cells. essential

Chromosomes, the Cell Cycle, and Cell Division - . systems of cell reproduction. the continuity of life is based on the

Cell Division and Genetics - . chapters: 12-15. why do we need cell division?. 2 reasons: growth and maintenance

CH 12 NOTES, part 2: Regulation of the Cell Cycle - . the cell cycle is regulated by a molecular control system. ● the

The Cell Cycle - . the cell cycle: process in which a eukaryotic cell divides creates two identical cells each cell has

Mitosis and Cell Division - . the cell cycle. as eukaryotic cells grow and divide, they pass through a cell cycle that