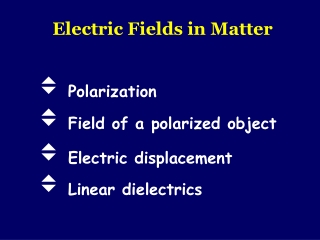 Electric Fields in Matter. Polarization. Field of a polarized object. Electric displacement. Linear dielectrics. Conductors. Matter. Insulators/Dielectrics. All charges are attached to specific atoms/molecules and can only have a restricted motion WITHIN the atom/molecule. Unit 6 Fields - . this unit uses the concept of fields to explain the behavior of electric and magnetic forces. the

4. Electric Fields in Matter - . 4.1 polarization. insulators: all charge is attached to the atoms or molecules. ( v -

A Crash Course in Electric Fields - . by leah chernoff. what are electric fields? what do they do?. an e-field (e) exerts

Electric Fields - . fields: action at a distance. remember in the lab, a charged balloon was able to attract small pieces

Electric Fields - . learning goal. know the convention related to the direction of a vector representing the electric