The Knights Templar and The Holy Grail - PowerPoint PPT Presentation 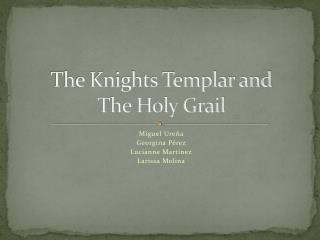 The Knights Templar and The Holy Grail The Knights Templar and The Holy Grail

Absolution - Then there will be righteous sacrifices, whole burnt offerings to delight you; then bulls will be offered on

The Holy Spirit - . lesson 2 inspiration, revelation and confirmation of the word. the holy spirit. he is god

The Holy Spirit - . lesson 4 miracles have ceased. the holy spirit. he is god inspiration, revelation and confirmation of

THE CRUSADES - . a quest for the holy land. crusades. a long series or wars between christians and muslims they fought

Holy Days/ Holidays - Religion/ leisure make sense of world which is beyond our observation, proof, understanding