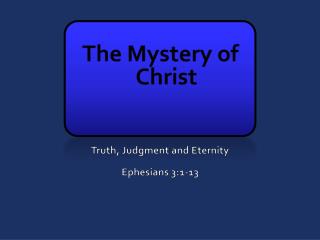 The Mystery of Christ. Truth, Judgment and Eternity Ephesians 3:1-13. In Review of Chapter 2. Our condition without Christ vv1-3 Dead in sins v1 Following the world and satan v2 Living for the flesh, we were objects of wrath v3 Our position now we are in Christ vv4-10 Redemption through the Paschal Mystery - . unit 6. the redemptive love and suffering of

The “Rapture” - . lots of discussion in christian community about it today!. hal lindsey – “ the late great

On Christ the Solid Rock I Stand! - . self-deception can be a very dangerous activity!. many who claim to be christians

Come Unto Christ - . taking the. ground. higher. elder robert giertz, july 2008. he receiveth of all people who come unto

Unveiling The Mystery of the GODHEAD - . a presentation by: ptr. ronnie millevo. denominational belief no. 1. trinity