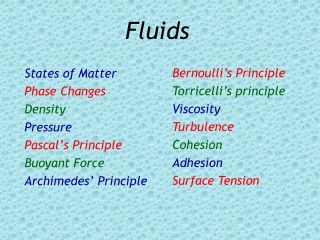 Chapter 5 — Fluids - . hydrostatics and hydrodynamics. fluids. a fluid is a material that has the ability to flow.

Ch 4 Fluids in Motion - . introduction. in the previous chapters we have defined some basic properties of fluids and have

Big Ideas in Fluids - . fluids are an important component of many systems . fluids have different properties that

Forces in Fluids - . physical science. fluids. a fluid is any material that can flow and that takes the shape of its

No fluids ? - . you have to be joking …….. basic principles of care we may disagree about the type of fluids …. but

“Oh yeah, and add an order for IV fluids …” - . how to order the right iv fluids for your patients. objectives.

CHAPTER 14 - . fluids. 14: fluids. fluids (liquids and gases), by contrast with solids, have the ability to flow. fluids