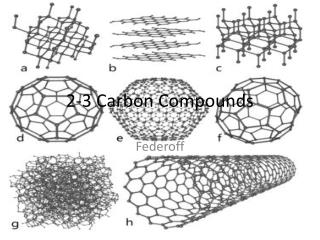 2-3 Carbon Compounds. Federoff. Carbon Compounds. Organic chemistry – the study of compounds that contain bonds between carbon atoms. The Chemistry of Carbon. Why is carbon special? It has 4 valence (outer) electrons to form strong covalent bonds

Chapter 3 Molecules, Compounds, and Chemical Equations - . elements and compounds. elements combine together to make an

Chapter 4 - . carbon and the molecular diversity of life. figure 4.1. carbon chemistry. carbon is the backbone of

Chapter 22 - . carbon and hydrocarbons. diamond and graphite video. carbon. found in all living matter 95% of all known

Classification of Hydrocarbons - . hydrocarbons are made up of only hydrogen and carbon . -ane cyclo__-ane -ene -yl.