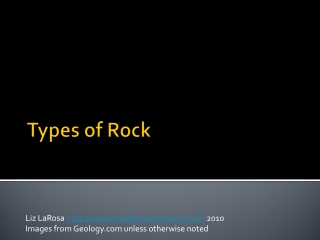 Liz LaRosa http://www.middleschoolscience.com 2010 Images from Geology.com unless otherwise noted. Types of Rock. Types of Rocks PPT Review. Be sure to complete your “Types of Rocks” notes as you view this presentation. What are Rocks?. Ch. 14: The Rock Cycle - . rock a naturally occurring solid mixture of one or more minerals or organic matter. rock

ROCK AND MINERAL TYPES - . minerals are chemical compounds, sometimes specified by crystalline structure as well as by

Types of Rocks - . sedimentary igneous metamorphic. sedimentary rock. write the term and what you believe it to mean.

The Rock Cycle - . how it all comes together!. iii. the rock cycle. is a model used to show how the three rock types -

Do Now - . what are the two types of metamorphism what type of rock is “born from fire” as its latin name suggests?

The Rock Cycle - . what is the rock cycle?. the process where the 3 types of rocks change, form new rock, and are

Fusions: - . rock and the world. fusion. as rock dominates popular music in u.s. and europe, other types of music have to

Types of Rocks - . questions to help you “rock” the upcoming test. 1. when sediments are compacted and cemented