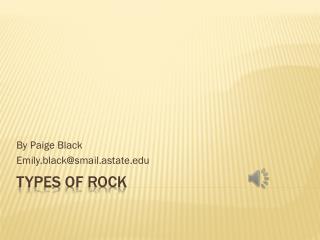 By Paige Black Emily.black@smail.astate.edu. Types of Rock. A rock is a naturally occurring solid mixture of one or more minerals, or organic matter. Rocks are classified by how they are formed, their composition, and texture. Rocks change over time through Types of Rock - Adapted from http://www.middleschoolscience.com 2010 images from geology.com unless otherwise noted.

Types of Rock - . what are rocks?. a rock is a naturally occurring solid mixture of one or more minerals, or organic

Types of Rock - There are 3 types of rock: sedimentary metamorphic igneous. types of rock. small particles of rock formed

Types of Rock - . learning goal for your last science unit  :. to analyze and describe the types of rocks that appear

TYPES OF ROCK and THE ROCK CYCLE - . igneous rock- formed when molten rock cools and solidifies. as the rock cools,

Rock Cycle/Rock Types Foldable - . setting up your foldable. first fold your paper in half (hamburger, not hot dog). hold

Rock Types - Perils of Classification - . in principle, a rock type has a narrowly defined composition and particular