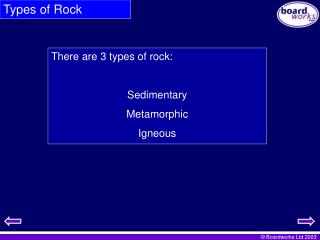 There are 3 types of rock: Sedimentary Metamorphic Igneous. Types of Rock. Small particles of rock formed by weathering are transported into the sea where they are deposited (sink) and form a sediment. ASP 2004 Building on the Rock - . packing up and on the road to cocke county, tn…. our home for the next week…. happy

On Christ the Solid Rock I Stand! - . self-deception can be a very dangerous activity!. many who claim to be christians

Women are Cra-Cra Men are Dumb as a Rock Especially - . friends people at work/school church peeps then home…. opposite

ROCKS - . what is a rock?. naturally-occurring mixtures of minerals , mineraloids (no crystals), or organic matter. types

The Rolling Stones - . overview: the british are coming. many british rock stars attained popularity in their own country