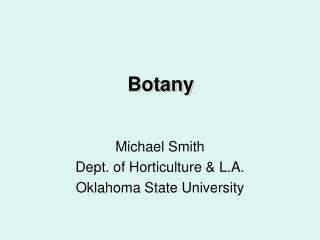 Botany. Michael Smith Dept. of Horticulture & L.A. Oklahoma State University. Some Commonly Used Terms. Node – The location of the buds on the shoot Internode – The portion of the shoot between the nodes Primary bud – The most dominate bud at a node