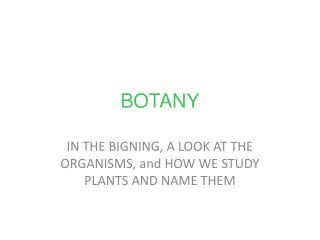 BOTANY. IN THE BIGNING, A LOOK AT THE ORGANISMS, and HOW WE STUDY PLANTS AND NAME THEM. HOW OLD IS THE EARTH. The generally accepted age for the Earth and the rest of the solar system is about 4.5 billion years (plus or minus about 1% ). Gases present on earth in the beginning.