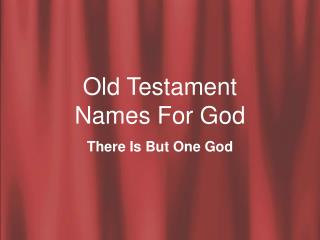 Old Testament Names For God. There Is But One God. Elohim “God”. Elohim “God” His Power And Might (1). Genesis 1:1 (NKJV) In the beginning God created the heavens and the earth Psalm 19:1 (NKJV) The heavens declare the glory of God ; And the firmament shows His handiwork The Old Testament God and Racism - . why so many colours? what was the “curse of ham”? does god condone slavery?.

Old Testament - . the primary redemptive event. the exodus. the promises of god : bound up with the land of canaan (ge.

Old Testament - . part i. lecture x. leviticus. location in leviticus. leviticus tells us of the worship taking place in

OLD TESTAMENT - . for prophecy never had its origin in the will of man, but men spoke from god as they were carried along

Old Testament Survey - . the fall to abraham. result of the fall. our relationship with god that was enjoyed before the

The Old Testament - . what is the “ old testament ” and why does it matter?. three questions. what do we call the “