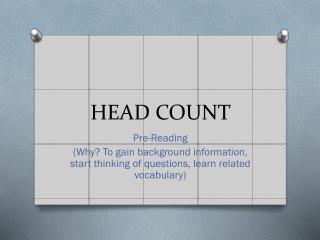 HEAD COUNT. Pre-Reading (Why? To gain background information, start thinking of questions, learn related vocabulary). What do people need to survive?. Air Food Water Shelter. Where do we get food from?. We grow it on our own Count/Non-Count Nouns - . non-count: milk q: how much cheese do you want? ice cream a: not too much. just a

Count and Non-Count Nouns - . ms. cox 6 th grade ela. count nouns. a count noun is something we can count. it has a

Cell count and WBC differential Count - . learning objectives. after completing this laboratory exercise you should be

Platelet count - . objectives. to understand the importance of doing a platelet count to know the methods of performing a

Cell Count - . by: ben chisam. what?. in this project you’ll have to find out facts about the human body by doing math

Borda Count - . a rank method of voting. how borda count works. if there are n candidates in an election, the top choice