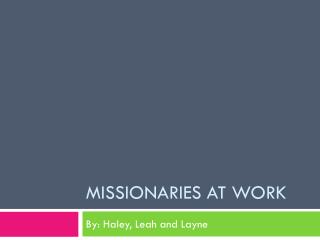 Missionaries at work - . fast fun facts. fast fact. in the year of 1833, the new y ork methodist publication said that

Missionaries - . mis·sion·ar·y 1. one who is sent on a mission, especially one sent to do religious or charitable work

Missionaries - . by: jason omann. relation to the

Missionaries - . by: lane, caleb, micayla, jessica. why did they come to wa?. they came to lead the indians to

Faithful Missionaries - . from the apostles to the waldenses lesson 26. pure, uncorrupted christianity came early to

Missionaries and Monks - 2013 a.d. (present) why do children have to go to school? who teaches them, and what do they

AT @ Work - . assistive technology in the workplace. tools to accommodate individuals with disabilities revised may 2008