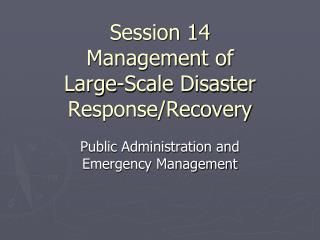 Session 14 Management of Large-Scale Disaster Response/Recovery. Public Administration and Emergency Management. Objectives. At the conclusion of this session, students will be able to Discuss the response and recovery processes for large-scale disasters Preparation for Disaster - . steve jones editor, sqlservercentral red gate software. be prepared i will do my best. why

Incident Response, Parking Management, and Maintenance Management Systems - Incidents could be anything, outhouses to