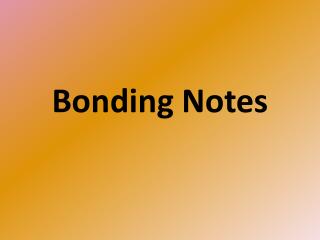 Bonding Notes. The periodic table includes four types of elements (5-1). Noble Gases – The most stable atoms (column 18). All have the maximum number of valence electrons All have 8 valence e-, except Helium with 2. Covalent Bonding Notes - . formed only between 2 or more nonmetals. electronegativity. how do you know which nonmetals to

Ionic Bonding Notes - . chemical bonds. 1. what is a chemical bond? a force that holds two atoms together 2. what is

Ionic/Covalent/Metallic Bonding Notes - . stable or unstable?. an atom is only stable if it has a full valence shell

Bonding - . forces that hold molecules together. learning goals. students will: understand how ionic and covalent bonds

Bonding - . two or more atoms join together to form a stable group. there are several types of forces (bonds) which hold

Bonding - . 8 out of 75 m/c questions free response—every year. in general:. all bonds occur because of electrostatic