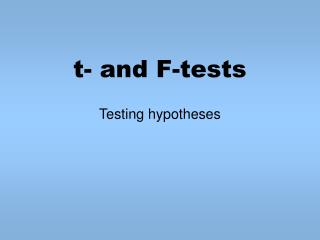 T-tests - . the t test for a single sample: try in pairs. odometers measure automobile mileage. how close to the truth is

T-tests - Scenarios. do children with adhd prefer rooms with plain versus patterned walls?examine whether time spent in

T-Tests and Chi2 - . does your sample data reflect the population from which it is drawn from?. single group z and

T-Tests and Chi2 - Single group z and t-tests. the basic goal of these simple tests is to show that the distribution of

Correlations and T-tests - . matching level of measurement to statistical procedures. we can match statistical methods to

F-tests continued - . introduction. discuss the problems associated with structural breaks in the data. examine the chow

Independent t-tests - . let’s think…. comparing 2 means drawn from the same population if we sampled enough, what