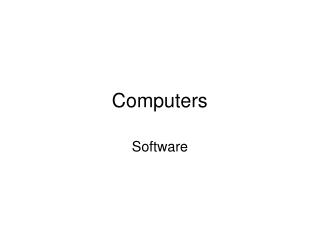 Computers - . a technology of change. computer technology. everyone needs to know the components of the equipment you

Computers - They're not magic! (for the most part)‏. computers. adapted from ryan moore. acronyms. pc “personal

Computers - Technology terminology. click on the links below to navigate to the terminology associated with each section.

Computers - . presented to you by cory collard. what is a computer?. definitely not a cup holder!. how they work. many

Computers - . what is a computer? general purpose device that is programmable electronic transform data. data. stored as

Computers - Choose from a wide range of health beauty products such as sunflower bath gift set for women, micronised