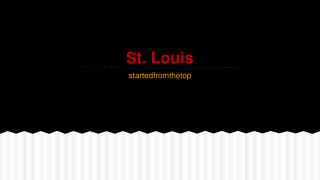 St. Louis. startedfromthetop. History Of St. Louis Jazz. Influenced by the immigration of Germans, and people from the Mississippi Delta and New Orleans. Heavy drums and bass of German music and quick upbeat music from the other areas combined to form Ragtime. Architectures for the Next Generation Internet and the Future Networks - . washington university in saint louis saint

Louis Pasteur - . by jamie mignot friday, february 27, 2004. &quot;imagination should give wings to our thoughts, but

About Saint Louis University - . one of america’s most prestigious catholic, jesuit universities founded in 1818 second