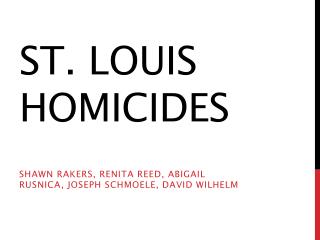 St. Louis Homicides. Shawn Rakers , Renita Reed, Abigail Rusnica , Joseph Schmoele , David Wilhelm. Background Information. St. Louis is rated #4 Deadliest city in 2012 according to PolicyMic with 113 murders. The number of murders has decreased by half over the past 20 years.