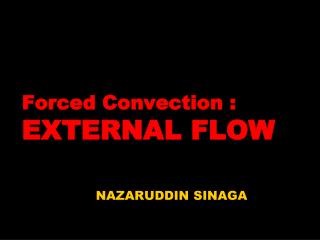 Forced Convection : EXTERNAL FLOW. NAZARUDDIN SINAGA. In this chapter we will study the following topics : Governing parameters for forced convection The boundary layers in external flow Forced convection over a flat plate Flow across cylinders.

CONGENITAL ANOMALIES OF EAR - . anatomy. anatomy of ear. both functionally and anatomically, it can be divided into three

External Cause Codes and Their Many Uses in Utah - . cristy sneddon, rhit utah department of health. objectives. external