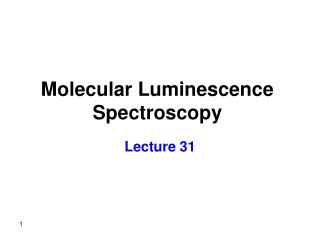 Molecular Luminescence Spectroscopy. Lecture 31. The relation F = KP 0 e bc implies the following a.       The fluorescence signal can be increased if the radiant power of the incident beam is increased. Therefore, always use more intense sources. Molecular Luminescence - . emission of a photon as an excited state molecule returns to a lower state chemoluminescence

MOLECULAR SPECTROSCOPY - . spectroscopy is that branch of science which deals with the study of interaction of

Molecular Spectroscopy - . molecular spectroscopy the study of which frequencies of electromagnetic radiation are