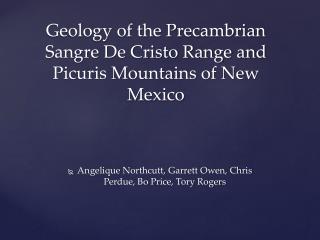 Report on the Geology of the Henry Mountains - . g.k. gilbert, 1877. time period

New Directions and the Importance of Geology - . susan smith nash, ph.d. aapg. “breakthrough” days. these are

Tectonics and climate of the Precambrian - . geology 103. when did the solar system form?. 4.56 billion years ago how do

Adirondack Geology: Old Rocks and New Mountains: Glenn A. Richard - . the adirondacks are a dome of old rock (1.1 billion

University of New Mexico - . ose logo for your presentaions and websites. for light backgrounds. no text. for dark