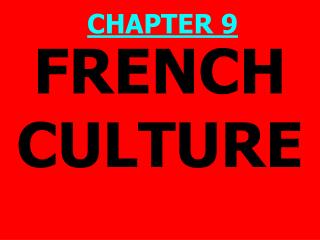 CHAPTER 9. FRENCH CULTURE. French Culture PRISMs. Is it OK for a culture to be “arrogant”? Is it possible for any culture today to escape the pull of secular modernism? Is existentialism a fount of human freedom or a cultural disease?