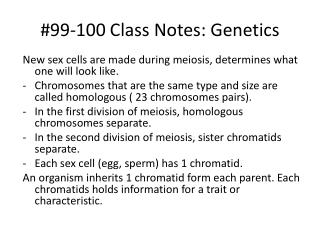 #99-100 Class Notes: Genetics. New sex cells are made d uring meiosis, determines what one will look like. Chromosomes that are the same type and size are called homologous ( 23 chromosomes pairs). In the first division of meiosis, homologous chromosomes separate. Notes - Have me check them in my office. they should be up to date as of the last class you attended. value: 25 pts. .

Chapter 11 Introduction to Genetics - . cpi biology hollison high school. 11-1 the work of gregor mendel. what is

Genetics and Heredity - . history. genetics is the study of genes. inheritance is how traits, or characteristics, are

Gouldian Finch Genetics - . an introduction to: head, breast &amp; body color mutations and their patterns of