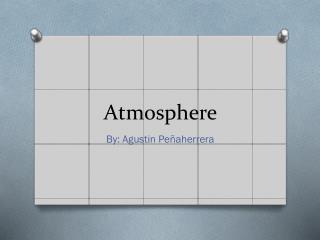 Atmosphere. By: Agustin Peñaherrera. What is it?. It is a layer of gasses that surrounds the Earth. All these gasses are hold down by Earths Gravity. Our atmosphere is what makes life sustainable by retaining gasses as Oxygen and dispersing many UV rays from the sun. Atmosphere - . what is the atmosphere. thin layer of air that regulates global temperature, and filters out dangerous

Atmosphere - . describe a graph which shows surplus and deficit energy. solar insolation: why does only 50% get absorbed

Atmosphere - 78% nitrogen, 21% oxygen water vapor up to 4% by volume leaves atmosphere as dew, rain or snow density of

Atmosphere - . what is it?. the gaseous portion of the planet; its envelope of air weather is the state of the atmosphere