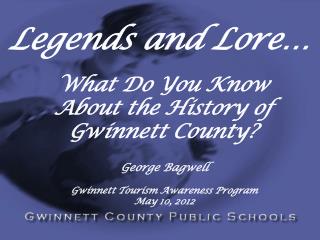 Legends and Lore…. What Do You Know About the History of Gwinnett County?. George Bagwell. Gwinnett Tourism Awareness Program May 10, 2012. QUESTION:. Where would Scarlett O’Hara have attended elementary school, if she were alive today?. HINT:. Unit 2 Myths and Legends - . part i. teaching aims. in this unit students are required to : 1) get to know some useful

Constellations - . what are constellations?. a group of stars that form a pattern in the sky. cool facts about

‘Legends’ associated with Deepawali - A row of lights… legends: a non-historical or unverifiable story handed down

ELA 7 Study Guide - . mrs. cooper. 1.) oral tradition - traditions, stories, and history that are passed down by word of

Domestic Violence in Child Custody Cases: Increasing Safety and Wellbeing for All Family Members - . the institute of

Norval Morrisseau - . ( 1932 – 2007). norval morrisseau was a canadian artist who created many colorful paintings and

Station 5 Popocatepetl and Ixtlaccihuatl - . eq: how do legends reflect a culture?. materials you will need:. prentice

An introduction to Greek Mythology - . it’s all greek to me!. greek mythology is a collection of myths and legends that