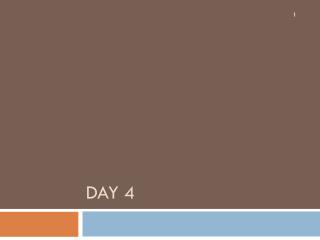 DAY 4. The Hardy-Weinberg Equilibrium. The Hardy-Weinberg law states that the frequencies of alleles in a population will remain constant unless acted upon by outside agents or forces. In other words, the proportion of dominant to recessive genes remains the same. DAY 4 - . cdn geography continued. put up overhead of river highway system showing how geography could have been overcome

Day 4 - . what number inserted into the following expression would complete the square?. 10.6 using the quadratic

Day 4 - . day 4. question of the week. why can’t you always believe what you think you see?. build oral language.

Day 4 - . flat breads pan de cicciolate conchas. flat breads. can be leavened or unleavened can be baked over open fire

Day 4 - . welcome. resistance blocks struggles barriers attitudes. what will you do?. 4 categories of barriers. community