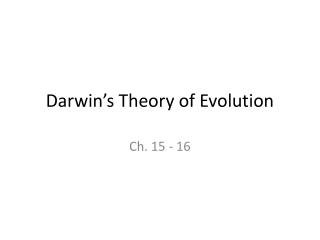 Chapter 16 - . darwin’s theory of evolution. ____ 1. darwin noticed that many organisms seemed well suited to a. being

Plant and Animal Adaptations to Fire - . what is evolution??. all changes that have transformed life on earth from its

Lesson Overview - . 16.1 darwin ’ s voyage of discovery. think about it. if you ’ d met young charles darwin, you