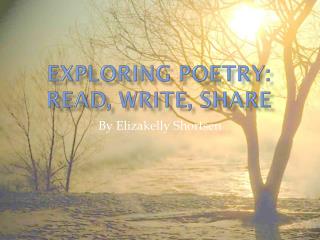 Read Poetry - . and open your imagination. 4 th grade communication arts created by julie pettyjohn. by the end of this

Exploring Self Through Poetry - . write an instant &quot;all about me&quot;

Exploring Children’s Poetry - . the poems of shel silverstein. shel’s biography. born in chicago in 1932 as shelby

A Read and write - Unit 6 a field trip. a read and write. what is missing?. catching butterflies. watching insects.