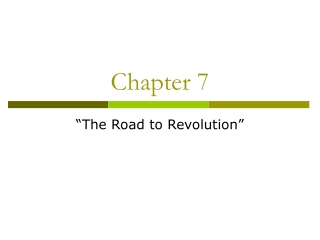 Chapter 7. “The Road to Revolution”. Roots of the Revolution. The American Revolution began when the first colonists set foot on America. Distance Weakens authority; great distance weakens authority greatly. Sailing across the Atlantic in took 6 to 8 weeks