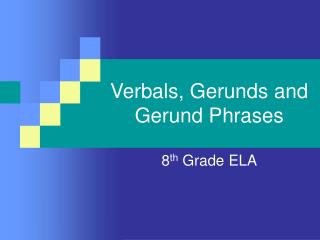 Verbals, Gerunds and Gerund Phrases. 8 th Grade ELA. Verbals and Gerunds. A VERBAL is a word that has a verb form but that functions as another part of speech. There are 3 types of Verbals – Gerunds, Participles, and Infinitives. GERUNDS High-Frequency Phrases - . first 100 words. the people. write it down. by the water. who will make it?. you and i. what

Third 100 Fry Word Phrases - . these are some of the most common phrases students find in their reading. practice reading

Sayings and Phrases - . for the 5 th grade. the big idea. sayings and phrases are important to study because they are

Phrases with Second 100 Popper Words - . over the river. my new place. another great sound. take a little. give it back.

High Frequency Word Phrases - . practice reading these phrases smoothly and fluently. he had to. she said that. to the.

High-Frequency Phrases - . third 100 words. near the car. between the lines. my own father. in the country. add it up.

High-Frequency Phrases - . third 100 words. near the car. between the lines. my own father. in the country. add it up.

Holiday Readings - . millburn/weisbrodt. 11/26 bell ringer. identify the verbal in each sentence and label it either a

Literacy 1 st Phrases - . list b. after we get home. such as this. he became rich. play with ben. lots of things. follow

Phrases with Third 100 Popper Words - . near the car. between the lines. my own father. in the country. add it up. read

Around the World - . clause and phrase review game . which of the following is a true statement about prepositional

Courtesy of Jill Johnson, jjohnson@esu6 - .net. click for other documents. george orwell - a. identify the gerund in the