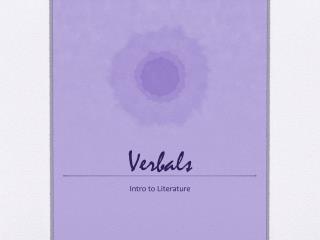 Verbals. Intro to Literature. Verbals. forms of verbs used as nouns, adjectives, or adverbs. They may be modified by adverbs and adverb phrases and they can have complements. Participles Past and Present Gerunds Infinitives. Participle: a form of a verb that acts as an adjective. Verbals - . participles, gerunds, infinitives. what is a verbal?. a verbal is a verb functioning as some other part of

Understanding Verbals - . a verbal is a verb that is being used as another part of speech rather than a verb. there are