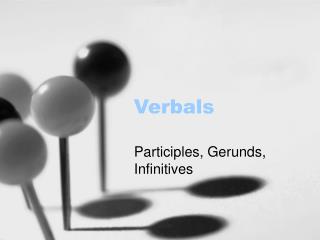 Verbals, Gerunds and Gerund Phrases - . 8 th grade ela. verbals and gerunds. a verbal is a word that has a verb form but

Verbals : - . take a closer look… they are not verbs… verbals are imposter verbs!!. what are verbals ?. verbals are

Ninth Grade Grammar - . verb week. why verbs matter so much how verbs work a plethora of verb variations ( verbals !)

Understanding Verbals - . a verbal is a verb that is being used as another part of speech rather than a verb. gerunds. a

Verbals are words that at root have a verb form but no longer function as complete (finite) verbs. - Verbals. verbals are

Verbals - . verbals are verb forms that act as some other part of speech. there are 3 types: infinitive – to + verb to