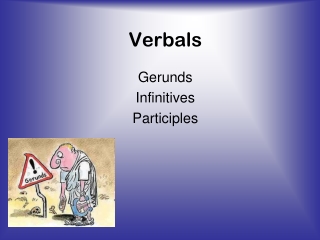 Verbals. Gerunds Infinitives Participles. Gerunds. A Gerund is a verbal that ends in “ing” and functions as a noun. Gerund as subject: Traveling might satisfy your desire for new experiences. (Traveling is the gerund.) Gerund as direct object: Verbals Notes (Day 1): Participles - . what is a verbal?. a verbal is a word that looks like a verb, but does not act

Verbals - . participles. verbal that is used as an adjective and most often ends in – ing or – ed. examples: the

Writing Tips - . verbals act as excellent transitions between sentences and paragraphs. for example:. an unnerving