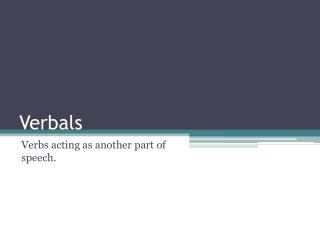 Verbals - . participle. a participle is a verb form that is used as an adjective. i’m having an identity crisis. verb.

Verbals - . participle. looks like a verb but acts as an adjective usually ends in – ed or – ing unless an irregular

VERBALS - . oh how fun! . definition. verbal is a verb form used as another part of speech types of verbals 1. gerunds 2

Verbals!!!! - . 8 th grade. in your ibook, create a frayer diagram! as we go through the power point, take notes. what

Verbals - . infinitives, gerunds, participles. infinitives. remember: -the word to plus a verb -can function as nouns,

verbals - . by alexis kitchens. verbals. a verbal is the form of a verb used as a noun ,adjective or adverbs. a verbal is

Verbals - . verb parts that function as nouns, adjectives, or adverbs. gerunds. - ing form of verb functions as a noun: