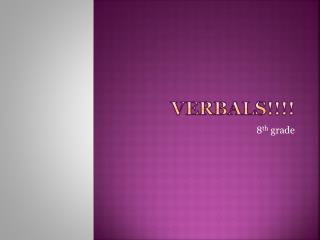 Verbals!!!!. 8 th grade. In your IBook, create a Frayer diagram! As we go through the Power Point, take notes. What are verbals?. Verbals are words that look like verbs, but are used as another part of speech. For example, would this make sense? Greg sleeping late. Verbals - . participle. a participle is a verb form that is used as an adjective. i’m having an identity crisis. verb.

Verbals - . participle. looks like a verb but acts as an adjective usually ends in – ed or – ing unless an irregular

VERBALS - . oh how fun! . definition. verbal is a verb form used as another part of speech types of verbals 1. gerunds 2

Verbals - . infinitives, gerunds, participles. infinitives. remember: -the word to plus a verb -can function as nouns,

verbals - . by alexis kitchens. verbals. a verbal is the form of a verb used as a noun ,adjective or adverbs. a verbal is

Verbals - . verb parts that function as nouns, adjectives, or adverbs. gerunds. - ing form of verb functions as a noun: