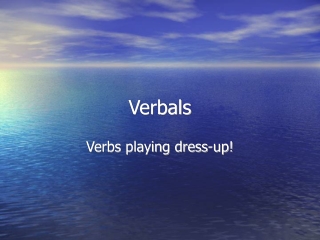 Verbs playing dress-up!. Verbals. Once upon a time, there was a verb named Swim!. Hi! My name is “Swim”. “Swim” in this sentence is an action verb, showing the action of the subject “I”. Most of the time, Swim’s job was to be the verb of the sentence…. AV I swim.