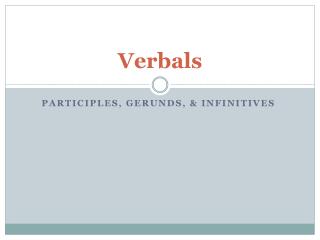 Verbals. Participles, gerunds, & infinitives. Participle. A participle is a verbal, which looks like a verb And acts like an adjective. Present participles end in – ing (as in swimming). Past participle end in – ed (as in remembered), Understanding Verbs: Gerunds, Participles, and Infinitives - . verbals. a verbal is a verb that functions as some other

Verbals!!!! - . 8 th grade. in your ibook, create a frayer diagram! as we go through the power point, take notes. what

Gerund Functions in a Sentence - . part 2. standard. elacc8l1: demonstrate command of the conventions of standard english

Verbals - . by: anuj dave. verbals. verbals are words that seem to carry the idea of idea of action or being, but do not

Verbals When a verb is not a verb… - . i am having an identity crisis. verb?. participle. a participle is a verbal that

Verbals - . intro to literature. verbals. forms of verbs used as nouns, adjectives, or adverbs. they may be modified by

Understanding Verbals - . a verbal is a verb that is being used as another part of speech rather than a verb. there are