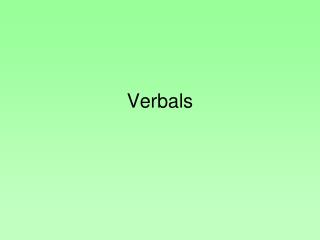 Verbals. Verbals are verb forms that act as some other part of speech. There are 3 types: Infinitive – to + verb To run, to walk, to cry, to sing Gerund – the present participle WHEN IT FUNCTIONS AS A NOUN. Swimming (Swimming is good exercise.) Flying (Flying makes her nervous.) Delivering Your Speech Steven A. Beebe Susan J. Beebe - Speech vs. talking. the power of speech delivery. delivery is

Gerunds - . shira , ari , naomi , rachel. verbals- what are they, even?. a verbal is a noun or an adjective formed from a

The Function of VERBALS - . gerunds, participles and infinitives. l .8.1.a. verbals homework: overview. monday: what is

Verbals and Verbal Phrases - . a verbal is a verb that acts as a noun, adjective, or adverb. the three kinds of verbals

Infinitives - . the final verbal…. infinitives. are verbals which means they are verbs that act as other parts of

Gerund Functions in a Sentence - . part 2. standard. elacc8l1: demonstrate command of the conventions of standard english

Verbals - . participles, gerunds, infinitives. what is a verbal?. a verbal is a verb functioning as some other part of