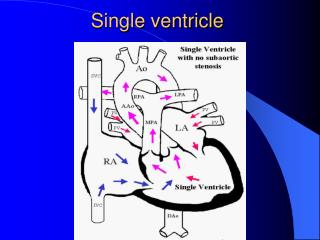 Single ventricle. Motasem is a 7 years old male patient born at home in Palestine as a product of vaginal delivery with mild cyanosis of the lips and extremities. At the age of 3 months the cyanosis became more prominent, so the family seeks medical advice. The Single Ventricle - . karim rafaat, m.d. the title “ single ventricle ” includes those lesions designated as both

ASSESSMENT OF THE RIGHT VENTRICLE BY ECHOCARDIOGRAPHY - . anatomy of the right ventricle. right ventricular anatomy.