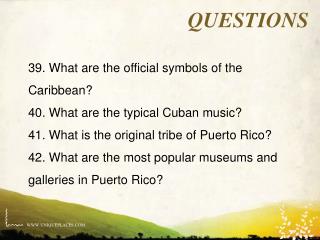 QUESTIONS. 39. What are the official symbols of the Caribbean? 40. What are the typical Cuban music? 41. What is the original tribe of Puerto Rico? 42. What are the most popular museums and galleries in Puerto Rico?. CARIBBEAN CULTURES:. CUBA AND PUERTO RICO. INTRODUCTION.