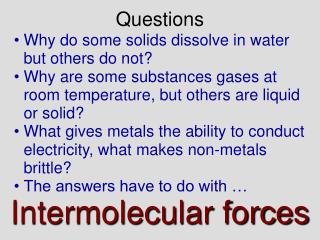 Questions. Why do some solids dissolve in water but others do not? Why are some substances gases at room temperature, but others are liquid or solid? What gives metals the ability to conduct electricity, what makes non-metals brittle? The answers have to do with … . Intermolecular forces.