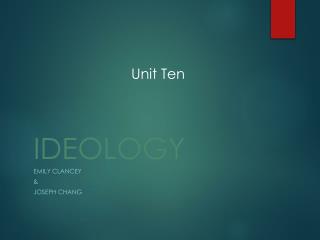 IDEOLOGY. Unit Ten. Emily Clancey & Joseph Chang. Facts about Ideology. Ideology is a body of ideas reflecting the social needs and aspirations of and individual, group, class, or culture Ex) politics, social issues, morality, ethics They are slanted, given the ideas of the director