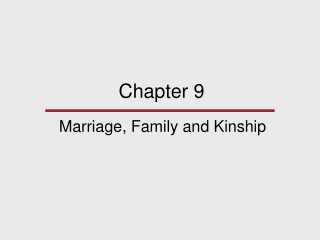 Chapter 9. Marriage, Family and Kinship. Class Exercise & Discussion. What is family? What is marriage? What are your personal ideals and ideas of marriage? comment on who should be partnered how partners should meet (i.e., autonomous versus arranged marriage )